Those puffy little pillows of sugary goodness that we call marshmallows, may have a sweeter history than you think! We don’t use marshmallows for much more than a tasty blanket of sticky sweet over a steaming cup of hot chocolate, or a fire-coated glue between two crispy graham crackers, or dipped in chocolate. But the marshmallow led a storied adventure before it retired to its lovely life swimming on top of cocoa.

Althaea officinalis. The plant from which the marshmallow was born, is a perennial flowering herb that thrives in wet, marshy areas. This mallow herb’s root produces a thick sap that humans are unable to digest. Greeks, Romans, and others discovered that when eaten, this sap leaves behind a soothing coating. Used as a balm, this sap for a long time was used in soothing toothaches, as anti-inflammatories, laxatives, and other ailment solutions.

In 2000 B.C., ancient Egyptians discovered the mallow to be a sweet treat only enjoyed by the pharaohs. Combining it with nuts and honey, the Egyptians were the first step in introducing the mallow to the candy world. But the marshmallow hadn’t taken on its latest appearance as we know it yet.

Being a tough and bitter plant, the marshmallow was used as a source of food during famine, not as a sweet treat. But fast forward to the 1800s, and the French candy makers discovered that upon combining the sweet mallow’s sap with egg whites and sugar, and whipping them into oblivion, a delightful little puff of goodness could be formed. Its name? Pâté de guimauve.

Still being used in medicine, as a soothing lozenge, Pâté de guimauve’s career wasn’t quite over. Production of these sweets was adjusted and now available in mass quantities. In 1927, the Girl Scouts Handbook was the first to provide us with a recipe for delight. The S’more.

Add a little science, and a man named Alex Doumak, and you end up with the ultra-puffed, soft little cloud we know as the marshmallow. Pop them in your mouth one by one, stuff ‘em between two crackers, or go back in time and use them as a wrinkle cream (we don’t recommend that one, it sounds like a sticky mess if you use store-bought mallows!) No matter what you do, we know you’re thinking about candy, chocolate, and sugar in its finest form. So order from the Chocolate Truffle and sink your teeth into some sweetness!

« Marzipan Eels & Sugary Meals: The Emergence of Dessert As We Know It
Chocolate Etiquette: Controlling its Temper with the Power of Physics » 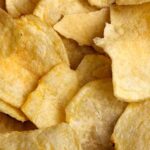 By now you know how much we love chocolate at The Chocolate Truffle, but with that delightful sweet bite of chocolatey goodness, we can’t help ... END_OF_DOCUMENT_TOKEN_TO_BE_REPLACED