Like many of our favorite things, the truffle was created completely by surprise. They say failure is the mother of invention… but a truffle is far from a failure. The decadent, richly tasty and sweet treat comes with a lovable oops of a story,

Tuber Melanosporum. Certainly you’ve heard of one, no? Neither had we, given that we majored in chocolate and not Latin. Our southern European friend, commonly known as the black truffle, stems from the Latin term tuber, meaning “lump.” Now you’re seeing it… how the expertly crafted truffle you are no doubt holding at this moment slightly resembles our forest floor friend.

Perhaps we aren’t fluent in Latin, and perhaps we aren’t fluent in French either… but let’s time travel to the 1920s and step inside the kitchen of French chef Georges Auguste Escoffier. (We all tried to say that in our best French accent, didn’t we?) Now his assistant held the task of pouring hot cream into a bowl of sugared eggs. A slight miss… and the cream ended up in a bowl of chopped chocolate instead. Rumor has it that Escoffier howled out, “Ganache!” or “Fool!”

Trying to salvage what he could, Escoffier furiously stirred the chocolate and hot cream and watched amazement at how it hardened. He slowly realized what an interesting way it could coat a sweet little ball of confection to form what looked like a French truffle (the sought after fungus we mentioned before.) And the chocolate truffle was born.

I don’t know about you, but we love that story. Whether it’s been a trifle twisted, or stretched over the years we can’t be sure. But we can be sure that no matter how it came into existence, we can’t keep our hands off chocolate truffles.

So the next time you sink your teeth into a silky truffle, remember the accidental way it came about. We sure are glad it did, because without it, we wouldn’t be…couldn’t be The Chocolate Truffle. 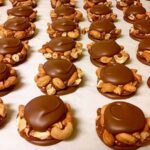